Regardless of which side you are on the healthcare debate, one thing’s for sure: the Affordable Care Act needs to get its branding in order.

Enrollment for the healthcare marketplaces started a few days ago – just in time for the lovely government shutdown. Although there’s currently no funding for serious advertising, one Obamacare-related branding effort has certainly made headlines. It involves ducks.

Just a few days before the shutdown, this image caught the attention of the Twittersphere: 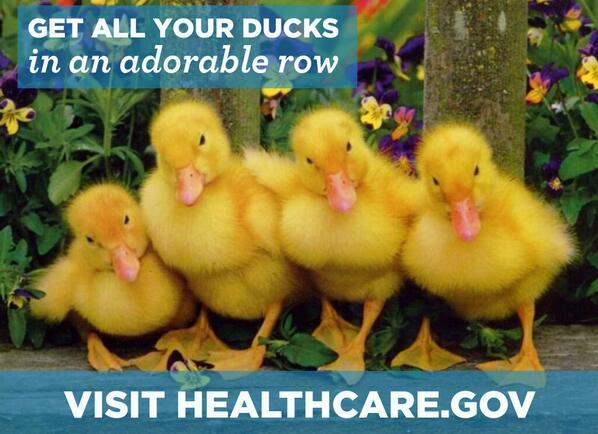 The kitchily-named “Adorable Care Act” twitter account is full of similar pictures, all urging you (specifically, the younger generation) to follow the cute animals and sign up for the act. But at this point, the effort is honestly more confusing than anything else.

Why They Waited a Bit Too Long

It’s important to note that Twitter ducks don’t constitute a full branding effort. The Adorable Care Act page is attempting to swing opinion towards the positive, but it still hasn’t changed the actual image and brand behind the legislation. Attempting to create a positive image for a piece of legislation or a new government program is a great thing – assuming you do it as soon as the legislation is announced (and maybe even make an effort to educate the public on the impact of the legislation). But the bill was signed into law back in 2010. Since then, the media backlash covered up any positive branding efforts that were put into place – if they existed at all.

This lack of branding has had it’s own effect on the act: namely, that no one seems to know what it is. A series of interviews conducted on Jimmy Kimmel Live showed that many people don’t even realize that Obamacare and the Affordable Care Act are the exact same thing. If your target audience doesn’t even know your name, you’re doing it wrong.

Is it too late? Technically, it’s never too late to try and re-vamp your brand. But when (and if) the government gets back on track and funding resumes, the marketing team behind the ACA will have a lot of work ahead if they want to make up for lost time.